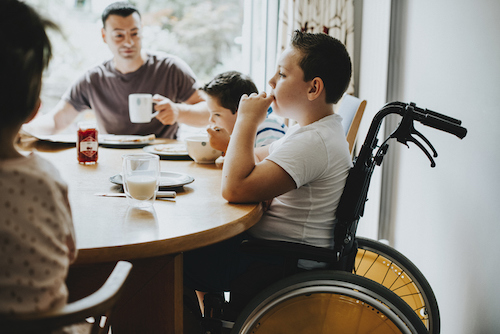 What is childhood PTSD?

Following exposure to a traumatic event, it is common for children to experience psychological distress.

In severe traumatic events, it is common for people to be symptomatic for a fortnight after the event. People that experience trauma are most likely to experience emotions of upset, increased anxiety, sleep and appetite disturbances. Some children will also experience emotions such as fear, sadness, guilt or anger.

For the majority of children, psychological symptoms of distress will settle down in a couple of days or weeks from using coping strategies and naturally occurring support networks to come to terms with the nerving experience. However, a small percentage of children the symptoms persist and develop into Acute Stress Disorder and/or Post Traumatic Stress Disorder (PTSD).

Children at risk of PTSD

A child’s risk of developing PTSD is often influenced by:

PTSD can cause a variety of symptoms in children, including unwanted intrusive thoughts, persistent efforts to avoid things that remind them of the trauma, and negative changes in mood and thought. PTSD may also be accompanied by:

Some trauma symptoms will be easy for parents, teachers or care givers to notice, while others, such as altering ways of thinking, may be subtler. My topic page Understanding trauma behaviour goes into more detail surrounding this topic. Below are some common PTSD symptoms;

Re-experiencing the trauma is a common symptom of PTSD. My topic page on Trauma Triggers goes into this topic with further detail. Children of all ages might re-experience their trauma during nightmares, flashbacks or intrusive memories. In young children re-experiencing might happen during play, which parents may be disturbing. My articles on Play Therapy and How Trauma Affects Children discuss this topic further.

PTSD symptoms can look different at different ages. Research shows that at a younger age children might not be able to articulate exactly what they’re feeling, but as a parent you might notice more avoidance of cues that remind them of the event.

Yes. When children are in preschool they use associative logic, following this they start to develop more concrete thinking, and then when they are in their adolescents they adapt more abstract thinking. At times through child development, they can find that they start to struggle with an element of their trauma that didn’t bother them before, and may feel like they need to see a therapist again to help them deal and process the new trauma symptom.

How can I help my child with PTSD?

Parents may like to read my other articles on how trauma affects children, and how they can help their child following a traumatic event and

If trauma behaviours persist for a couple of weeks, symptoms may have developed into PTSD. Treatment for childhood PTSD is recommended, as living with PTSD is enormously distressing and left untreated may have a negative impact on your child.

Larissa Watter is a Brisbane counsellor, passionate about working with children. She is currently furthering her studies by undertaking a Certificate in Child Centred Play Therapy.