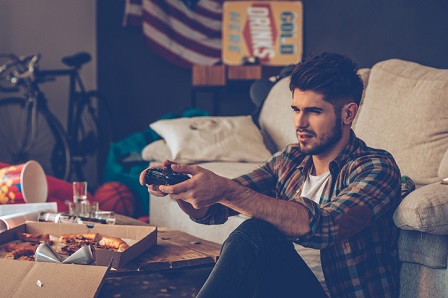 Currently video game addiction is not a diagnosable disorder, however, it IS an increasing problem in society.

Recent studies found that 6 to 15 percent of all gamers show signs of addiction (Psychguides.com).

The use of video games has increased rapidly and become an incredibly popular form of entertainment (Prot, Anderson, Gentile, Brown, & Swing). The excessive amounts of time that gamers spend playing games is very disruptive to their everyday lives. And online games, specifically those for multiplayers, pose a bigger risk for addiction.

Rai Cornell lists a few symptoms of someone that is addicted to gaming. He states that an addicted person has difficulty in engaging in any other activities, as the urge to play increases to a point where the person feels “compelled” to play, and the possibility to resist becomes less.  In many cases this addiction also has an influence on their physical and mental health and personal hygiene.

Other problems arising from video game addiction include fatigue, pain and weakness. Any person that plays video games for a very long period of time, runs the risk of physical injury. Some of these injuries may include “video gamers thumb” and “nintendanitus”, also known as carpal tunnel syndrome, or bursitis (inflammation) – which can create long term issues with the hands and arms of the gamer.

Why do People Get Addicted to Video Games?

Cornell also discusses the influence of dopamine on the development of video game addiction disorder.

As a neurotransmitter, dopamine is a major role player in in the reward system of the brain; it also is a role player when it comes to problem-solving, attention and memory.

The hormone dopamine is released during pleasurable activities, for example eating, using drugs, and watching pornography. This heightened release of dopamine may be a factor that contributes to getting addicted to gaming, as well as making it difficult for the addict to stop this behaviour.

Treatment for this addiction is the same as for other behaviour addictions. Counselling and behaviour modification techniques are some of the most effective strategies; basically there are three ways to address video gaming addiction:

Whether is recognised as a “disorder” or not, video gaming addiction is a real problem for people of all ages, so it is certainly worth becoming more aware of the dangers and how we can help addicts to live a healthier and more fulfilling life.

Corey Human has nearly 20 years’ experience working with teenage boys and young men at risk or struggling with self esteem, video game addiction and other problems. He provides counselling to adolescents, adults, couples, parents and families in both English and Afrikaans.