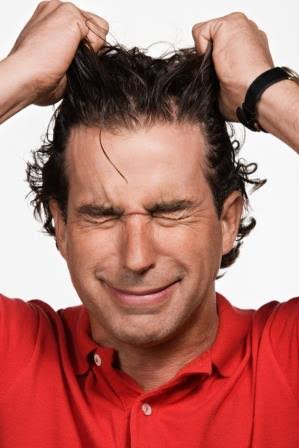 Often used figuratively, the phrase ‘I could rip my hair out’ is used by people to express feelings of frustration, anxiety or boredom. However, there are people who literally rip their hair out to alleviate tension.

Hair pulling or trichotillomania is a disorder characterised by repetitive pulling out of one’s hair, resulting in hair loss and repeated attempts to decrease or stop hair pulling. The most common sites are the scalp, eyebrows and eyelids, although hair pulling may occur from any region of the body in which hair grows. Hair pulling may occur in brief episodes throughout the day or during less frequent but more sustained periods that can continue for hours.

Associated features and behaviours
Hair pulling may be preceded or accompanied by various emotional states. For example it may be preceded by an increasing sense of tension or triggered by feelings of anxiety or boredom, or it may lead to gratification or a sense of relief after the hair has been pulled out. Pulling can be classified into two subtypes:

Automatic pulling: characterised by pulling episodes that occur primarily out of an individual’s awareness. These episodes may occur when an individual is engaged in sedentary activities such as watching television, reading a book or sitting at the computer and they only become aware of the pulling afterwards, when seeing hair on their lap, clothing or furniture.

Focused pulling: characterised by pulling with an almost compulsive quality and includes situations in which an individual pulls in response to negative emotional states such as stress, anxiety or anger.

For some, hair pulling may involve certain rituals or behaviours. These include searching for a particular kind of hair to pull (e.g. hairs with a particular texture or colour), trying to pull the hair out in a particular way (e.g. so the root comes out in tact), visually examining or playing with the hair after it has been pulled out (e.g. rolling the hair between the fingers, pulling the strand across the lips or biting and swallowing the hair).

Prevalence and onset
In adults and adolescents the prevalence rate is estimated to be between 1%-2%, with females more frequently affected than males. Hair pulling may be seen in infants, however onset mostly coincides with or follows the onset of puberty. The usual course of trichotillomania is chronic and can lead to irreversible damage to hair growth and hair quality if left untreated.

Effect on functioning
The effects of trichotillomania extends far beyond the visible loss of hair. Feelings of guilt, shame and embarrassment may result in avoidance of social situations and negative impacts on close relationships and family functioning. These feelings, behaviours and experiences may in turn increase stress, exacerbate symptoms or contribute to the development of additional disorders such as depression or anxiety. Shame and embarrassment may also lead people to spend excessive amounts of time and money concealing their hair loss. Some people may even avoid seeking medical care for fear of being exposed.

Other promising therapy approaches include Acceptance and Commitment Therapy and Dialectical Behaviour Therapy. Medications have been found to reduce the symptoms in some individuals. However, they are most often used to lessen feelings or sensations that can increase hair pulling, rather than treat the disorder itself.

There are also some things you can do at home to help reduce the symptoms. Some of these include:

If hair pulling is negatively impacting on your well-being, seeing a psychologist can help provide you with the skills to better manage your condition.