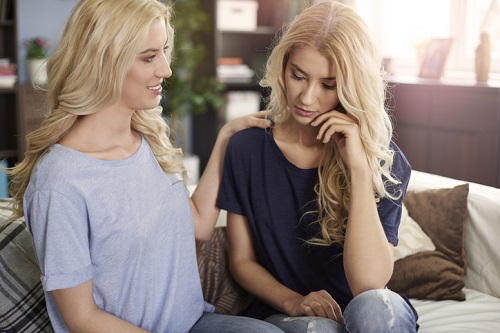 If you love and care for someone with Borderline Personality Disorder (BPD), whether that be a spouse, friend, parent or sibling, it’s important to educate yourself in this area.

What is Borderline Personality Disorder?

a pervasive pattern of instability of interpersonal relationships, self-image, and affects, and marked impulsivity beginning by early adulthood and present in a variety of contexts”

It then goes on to list nine symptom areas where these patterns are evident. To meet the criteria for BPD, a person must exhibit significant symptoms in at least five of these nine areas.

The nine symptom areas described by DSM-V can be summarised as:

BPD is usually first evident during adolescence or early adulthood. Some researchers working with people with BPD, have suggested a better label for this condition may be “Emotional Intensity Disorder” or “Emotional Dysregulation Disorder” because one of the prominent symptom features of BPD is intense emotional responses to what often seem to be quite minor events.

On the other hand, the label “personality disorder” captures the enduring pattern of thoughts, beliefs and behaviour, as well as emotional responses.

Unfortunately, the label “Borderline Personality Disorder” has developed some unhelpful negative connotations among some people. These negative connotations have largely developed from outdated understanding of the nature of the condition. BPD distorts the individual’s self-perception and interferes with their ability to maintain stable relationships. Those who suffer from BPD may be seen as highly manipulative, dependent and dramatic, but mental health professionals understand that this behaviour arises as a dysfunctional way to cope with overwhelming fear and emotional pain.

The International Classification of Diseases – 10th Edition (ICD-10) categorises BPD under the label “Unstable Personality Disorder” which it divides into two subtypes: (i) Impulsive type and (ii) Borderline type.

It is common for people with BPD to suffer from other psychological disorders at various stages, such as depression, anxiety disorders, alcohol and other drug abuse disorders and eating disorders.

The pain, emotional instability and impulsive behaviour of borderline personality disorder place these individuals at risk of alcohol or other drug abuse. The relationship between BPD and addiction is a volatile one. The use of drugs and alcohol aggravate some of the more dangerous symptoms of BPD, most notably, rage and depression. Those who have BPD are more likely to engage in drug or alcohol consumption as an attempt to numb the pain of their fear of abandonment.

In order to overcome a profound sense of emotional emptiness, they frequently engage in self-injuring behaviours, like cutting. They are also prone to suicide attempts, especially when substance abuse is involved.

Although the origins of BPD remain unknown, there are several theories about how this complicated personality disorder begins. The Mayo Clinic posits the following possible origins of BPD:

More research is required to provide a definitive answer as to what causes BPD.

Supporting Someone who has a Diagnosis of BPD

BPD can impact every aspect of a person’s everyday life and wreak havoc in their relationships.

Considering the stigma, the lack of sufficient research and the lack of public education on mental illness – especially heavily stigmatised disorders like BPD – it can be challenging to know how to support friends and family facing symptoms of BPD, or even how to approach the subject of mental illness in a way that’s respectful and effective.

People living with BPD tend to be notably empathetic, passionate, loyal and resilient, and there are many ways to provide support. It’s true the symptoms of BPD tend to infiltrate friendships and relationships, but – like anyone struggling with overwhelming emotions, mood swings, impulsivity and more – a little effort goes a long way. Here are some tips if you are supporting or caring for someone with borderline personality disorder.

Even if you don’t understand why someone is feeling a certain way or if their reaction seems overdramatic, it’s important to recognise that whether or not you agree, that doesn’t make the emotion any less real.

Whether or not it seems like someone “should” feel a certain way doesn’t change the fact that they are feeling that way. Often, someone with BPD has a history of emotional invalidation, neglect or abuse. This leaves them afraid to trust their own emotions, so a little validation can go a long way. Sometimes living with BPD can feel isolating, and external validation and acknowledgment of their experience can be an important step to recovery or, at the very least, surviving a moment of distress.

If someone with BPD opens up to you, pay attention. Rejection is difficult for anyone but can be especially debilitating for someone with BPD; if they feel silenced, ignored or sense you are generally uninterested in what they have to say, that can be painful enough to stop them from opening up at all.

Make a point to do your own research rather than expecting them to do it all for you. Scour through other articles on the web, read about BPD from the perspective of people who have it, familiarise yourself with the symptoms and treatment options, read a book about it, etc. Assure the person you care about them by putting forth the effort to learn about what they’re dealing with; ask how you can help and show genuine interest in their wellbeing.

When it comes to BPD, triggers can be difficult to avoid as they’re generally based on relationships and interpersonal interactions. Each person is different, but common triggers for people with BPD include harsh criticism, the perceived threat of rejection or abandonment.

Abandonment sensitivity may seem inconsequential to someone without the disorder, but it can be very real for those with the disorder.

Additionally, people with BPD may be triggered by their own thoughts, memories or reminders of past trauma. Despite the stigma associated with triggers, they must be taken seriously. There’s a difference between feeling hurt or offended and being triggered by something; when encountering a trigger, for example, a person may face intense emotional reactions in addition to debilitating physical symptoms such as difficulty breathing, chest pain, extreme nausea and vomiting, hot flashes, uncontrollable shaking and sweating, body aches, loss of appetite and total exhaustion.

Dialectical behavioural therapy (DBT) is a common and reliable treatment option for people with BPD.

DBT is a lengthy program divided into four basic modules or skill sets — mindfulness, emotion regulation, distress tolerance and interpersonal effectiveness. It isn’t for everyone, but much of the content of DBT can be beneficial to anyone with or without BPD, and most of the skills, tips and tricks are available online.

Everyone has their own preferred coping skills, so while some people find peace in practicing, for example, the “Non-judgmental Mindfulness” skill, others may find it challenging and frustrating. Someone else may find the TIPP (Temperature, Intense exercise, Paced breathing and Paired muscle relaxation) skills of DBT to be the most effective way to calm down during moments of intense distress, and it can be helpful to have someone remind them of these skills when they are feeling particularly worked up.

One of the most frustrating symptoms of BPD can be the person’s tendency to ruminate over comments, moments and mistakes that affect the way others perceive them. The threat of rejection can be enough to send someone spiralling into a paralysing panic attack or worse. The best way to avoid this kind of thing is just to address the situation directly but graciously, keeping the person’s triggers in mind. When it comes down to it, compassionate communication – while not always easy – is fundamental.

Remember that people with BPD tend to be particularly sensitive when it comes to interpersonal interactions, and triggers can be everywhere.

One of the most prominent symptoms of BPD is the debilitating fear of rejection, abandonment and isolation. Keeping up with relationships can be an overwhelming roller coaster in itself when you have BPD, and although people with the disorder, like anyone else, are bound to make mistakes, try to keep in mind the risks they take every time they open up or let someone into their world. This also means these individuals deeply treasure the people who put forth an effort to understand their experience. Often, effectively supporting someone with BPD is as simple as reaching out or actively listening with empathy and compassion.

Everyone is different and heals in different ways, but it’s important we make the effort to support one another – especially when faced with a disorder as frightening and life-threatening as BPD. You don’t have to live with the same symptoms in order to support someone who does. Really, these tips can be useful for any relationship; validation and respect for another’s emotional experience can be a relief to anyone, whether or not they have BPD or exhibit any traits of the disorder.

It can be challenging to keep all these things in mind at times. Still, if you find yourself feeling irritated, try to consider the obstacles people with the disorder overcome every single day. BPD can cause someone to feel conflicted by their desire to maintain close relationships and the urge to isolate themselves to avoid feelings of rejection and abandonment.

When someone is used to feelings of emptiness and isolation, support from loved ones, friends and acquaintances is often what keeps them afloat. It’s important people have allies by their side as they navigate a disorder as unpredictable and stigmatised as BPD.